So I come from Poland and have, evidently, visited the country many times. This year, however, felt more distinctive and that is due to several factors. Firstly, the journey in itself was… different. It began on a Monday morning; my mum and I took a train to Cambridge, where we took a direct coach to London Victoria Station – it was cheaper and, in a way, easier than getting on another train. By then, it was the afternoon and whilst waiting for our coach to Wrocław, my brother came and it was fun reconnecting with him: we hadn’t seen each other in ages.

Eventually, the coach came; we boarded it and even thought about sneaking my brother onto it (we didn’t, sadly- I could have used his company). I barely slept – only 3 hours, and my mum less. We had a lot of energy, though. During that journey, we heard the quintessential ‘babcia’-s complaining, watched two decent movies: ‘Radin!’ (a French movie) and ‘Racing Stripes’ (starring Bruce Greenwood) and, finally, stopped at a few petrol stations in both Germany and Poland – where we ate some warm Polish ‘ziemniaki’ and ‘sałatka’ (potatoes and salad); yum. 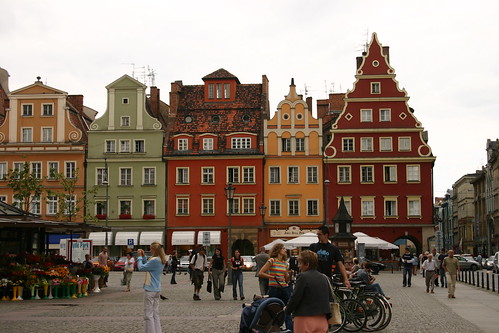 Anyway, once we arrived in Wrocław, we hurriedly walked to the train station and caught on the 2hr fast-travelling train to Jelenia Góra – where we spent the majority of our time. This condensed version is us, enduring 33 hours of travel.

After our long sleep, on Wednesday morning, we –  including my mum’s friend (who would lend us a part of her house), set off to a youth Christian summer camp, situated in a Church field, which the friend’s son and I were a part of. I was astounded by how they all knew each other and initially felt like an outsider – particularly with my not-as-good-as-people-educated-in-Poland accent and general language issues.

While building the tent, we realised we bought a tiny backpacker’s tent and a new sleeping bag 160cm long  – I am 173cm tall… It was quite an uncomfortable difference. I was disappointed about that but I guess my ten nights sleeping there weren’t that bad – I borrowed a blanket.

In the first day, I made one friend – Wiktoria (Wika) – we stuck together. We made friends with the one and only Igor as well as the beaming Sebastian. Together, we spent nights talking and eating peanut butter with rice cakes (the latter wasn’t as often; Biedronka – a classic Polish grocery store – was far). With each day, I made new friends. I even learnt how to play volleyball! I was pretty decent at it, too. I swam in a freezing waterfall three times and can proudly say that Wika and I were the ones who endured the icy water the most.

On one of the last days, I spent a couple of hours lying on the grass, gazing at the stars with a new friend, Gosia (pronounced just like Zosia, just with a G). Those little moments are so distinctive and so pleasant to think about. If you can, go to a summer camp and meet new people, it’s so fun and you learn so many things. After the summer camp, I spent the last days with my mum exploring exciting local attractions. We took a train to Szklarska Poręba, and took a long walk to the ski lift up to Szrenica (a mountain in the Karkonosze Polish mountain range). That was freaking brilliant – the view was amazing!

We eventually had no choice but to return to England. I did that with sadness. I wanted to stay so badly. We took the plane back to England and were picked up by my dad at Stansted. Although I had missed sleeping in my cosy bed, at that exact moment I was sad to be away from the rough ground, covered by my borrowed blanket, protected by my feebly sized tent and in the morning, I missed that soft fingerstyle guitar track gently waking me. Thinking about it now, I miss it and would do anything for a weekend with the same people in the same conditions. It sucks that I live approximately a sea and 3 countries away from them. But the good news is that I’m going back there next year.